YouTube is a video sharing website where people can stream and share vidoes. On this website people can create their own channels to upload their content which can consist of gaming, vlogs, tutorials, promotions, and etc. With the creation of a channel, comes with subsricbers who are people who found interest in the videos uploaded and ratings that include views, likes, dislikes, and comments. However, if someone does post a video that consists of any copyright material, the channel could possibly recieve a copyright strike and if it gets 3 strikes, the channel will be shut down forever. The website was created in the year 2005 on February, 14 and was founded by Chad Hurley, Steve Chen, and Jawed Karim. 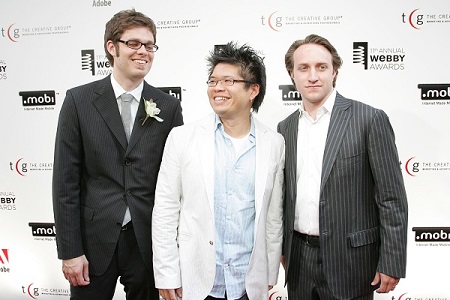 On the right, Chad Hurley, is an American co-founder and the former CEO of the video sharing website YouTube and in June 2006, he was voted 28th on Business 2.0's "50 People Who Matter Now" list. In the middle, Steve Chen, is a Taiwanese born American entreprhe video that was released is named "Me at the zoo" and as of this year, it has reached 34 million views. All together, these 3 men created the website simply for fun and their past experience with one another before making the website was knowing one another as pay pal employees.

This video is titled "Me at the zoo" and was the first ever youtube video to be posted on the website, in the year 2005 by YouTube's co founder Jawed Karim